Mansa Musa, King of the Malian Empire
The Wealthiest Man in History

Mansa Mūsā (c. 1280 ~ c. 1337), remains the wealthiest person in world history. His wealth is estimated to be $500 billion. In 1312, he became the 9th Mansa (Emperor) of the Islamic African Kingdom of Mali, and was the grand-nephew of Sundiata Keita, founder of the Malian Empire. Mansa Mūsā is famously remembered for his legendary Hajj pilgrimage to Mecca, Saudi Arabia (4,000 miles trek) between 1324 and 1326. Emperor Mūsā traveled from his capital of Niani on the upper Niger River to Walata (Oualâta, Mauritania) and  then to Tuat (now in Algeria) before making his way to Cairo, Egypt.

It has been estimated that Mansa Mūsā was accompanied by an impressive caravan comprised of 60,000 soldiers, servants and heralds dressed in brocade and Persian silk. He rode on horseback and was heralded by an advance of 500 persons, each carrying a gold-adorned staff. Mansa Mūsā was accompanied by a procession of 100 camels, each carrying 300 pounds of gold. So immense was the generosity and spending of the Emperor, that the value of gold in the Cairo market and economy depreciated for twelve years. 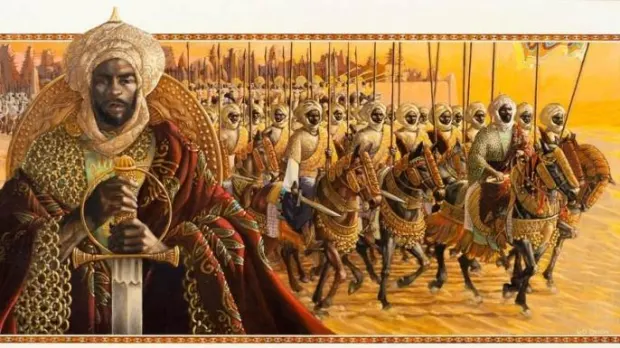 Mansa Mūsā ascended to the throne in 1312 after his uncle, Abubakari II, for whom he served as deputy, temporarily relinquished power and disappeared while voyaging by sea to seek out the limits of the Atlantic Ocean with 1000 ships filled with gold, water, and other provisions. Under the rule of Mansa Mūsā, the Malian Empire expanded exponentially encompassing most of West Africa from the West African coast through the inland commercial center of Timbuktu to the far corners of the Sahara Desert including current-day Senegal, Gambia, Guinea, Niger, Nigeria, Chad, Mauritania and modern day Mali. As the Malian Empire expanded so did the global trade and economy of Mali and the standing of Malians around the world. Mansa Mūsā built illustrious mosques and redeveloped the ancient City of Timbuktu with refined schools, universities, libraries and mosques making it one of the world’s intellectual centers of learning.

Scholars argue that Abubakari II made it across the Atlantic Ocean and landed in the Americas a century before Christopher Columbus was born. After, Abubakari II and his men were never seen nor heard from again, Mansa Mūsā officially ascended to the throne. Scholars have credibly argued that Abubakari II arrived in the America’s including pre-Columbia America as evidenced by a large number of Malian or Negroid figurines, pipes, pottery, and statutes with tattoos with distinct Mande markings on the their faces. Malian and Moorish tobacco cultivation, strands, and uses in the Americas including modern day Dominican Republic and Nicaragua were uniquely West African. The noted historian Ivan Van Sertima rightly argues that “[f]rom the medicinal use of tubbaq [tobacco] among the Arabs, and the medical and magical use of it among the African, there arose the habit of oral smoking.”

From their high-quality construction to the succulent Cameroonian, Dominican and Nicaraguan tobacco, Mansa Musa Gold cigars were birthed in the affluent African and Afro-Latin traditions of tobacco husbandry and smoking. The African descendants of the Malian Empire in the America’s developed, refined and innovated the “habit of ‘oral’ smoking [as well as] several medical and magical functions…[that] were transferred from the Africans to the Americans in the pre-Columbian times.”